The US and the UK might get all the attention but should we be looking to Canada for innovative open data initiatives?
• Apps built with Toronto’s data 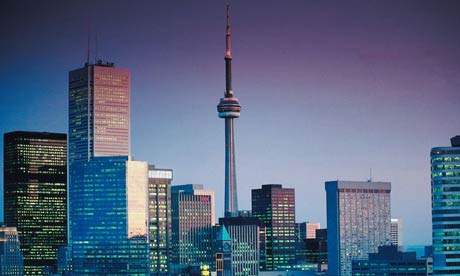 Open data in Toronto: open data initiatives are springing up all over Canada

Imagine if you took the historic records of everyone who died in the first world war. Then you matched them to one area to see how it had been affected. Or if you wanted to see if one part of your city had an epidemic of bedbugs. Or if you wanted to find out where the most guns are.

This is the work of data journalist Patrick Cain, quietly and methodically producing strikingly interesting maps of his home city of Toronto.

Patrick Cain’s map of rate per 1,000 of Toronto police officers in the Greater Toronto Area, by postal code

Enthralled by open data initiatives around the world, Canadians from Ottawa to Vancouver are embracing spreadsheets as never before – and producing great work which you don’t often hear about outside the country.

Patrick Cain works by doggedly pursuing datasets, often from official sources which don’t want to know – but bolstered by a powerful freedom of information system:

If something is uncontroversial (like dog licences by postal code) there are often no issues about releasing it. On the other side, we have the sex offender database, which I’ve been trying to get access to since the spring in 2008. Sometimes there is ineffective resistance, like the landlord and tenant appeal board that tried to get me to sign a non-disclosure agreement. Mostly I get things in the mail as the law demands … Everybody (including me) likes the rage-against-the-machine stories, but in the majority of cases the system works more or less as intended.

Cain is one of the most established of the new breed. Names mentioned by those in the know include Chad Skelton on the Vancouver Sun, Rob Cribb at the Toronto Star; David McKie at CBC and Glen McGregor at the Ottawa Citizen.

Toronto’s open data intitiative is run by a small team of enthusiasts in the city authority’s web department. Led by Trish Garner, the unit updates the site every day with raw datasets from local election results to detailed boundary mapping. And all in addition to their day job of keeping the city’s tech running. She’s inspired by the worldwide open data movement.

I think there’s a large community of developers in Toronto and across Canada which is inspired by what’s going on in the UK and in the US under the Obama administration and want to see change here at home. A good majority have registered with us and are quite avidly following what we’re doing.

Politically, she says support is growing:

There has been solid support from the very top – our Mayor – and from the City Clerk and the CIO. Indications are that the mayor-elect [Rob Ford was elected earlier this month] will also be a champion. This is key for us. I have to say, too, that it wouldn’t be possible to carry on without the constructive feedback and support we’ve received from the developer community and the dedication and enthusiasm of a bright, highly motivated, energetic team. They love what they do and they have fun.

The Canadian government is consulting on an open data policy and recently, Canada’s biggest open data sites – Toronto, Vancouver, Ottawa and Edmonton – have started getting together to set a series of open data standards. Jury Konga, who has been helping to create the G4 Open Data Framework (you can see some of his presentations here) says cities all over Canada are jumping onto the open data train: you can see our collection of Canadian open data sites here. He adds:

Canada is a hive of activity in Open Government and Open Data and I only see it increasing … We have also seen Open Data surface in the political realm where the Liberal Party of Canada recently put forward a new policy of Open Gov – Open Data and mayoral candidates in Toronto advocated increasing the Open Data program in Toronto … I am escstatic with the progress we’ve made BUT there is much more to do.