Thomas Guy (1645-1724) was an English businessman, politician and philanthropist who founded Guy’s Hospital.

For many generations, male children in the Silk family have been given the second given name of Guy, presumably in honour of Thomas Guy. However, Guy did not marry or have children of his own, hence there is no direct ancestral line between Thomas Guy and our branch of the Silk family.

Guy was born in 1645 to his father, Thomas Guy (1597-1652) and his wife, Anne Voughton, in Horseleydown, Southwark, on the south side of the Thames River in London. Thomas was the eldest of three children; his brother Samuel John was born in 1648 and his sister Ann was born in 1652. After his father’s death when Thomas was only 8, his mother Anne moved the family to her hometown of Tamworth, in Staffordshire and about 14 miles north-east of Birmingham. His mother remarried in 1661 to Joseph Seeley.

Genealogical Connection between Thomas Guy and the Silk Family

Research examining Guy’s extensive and detailed will, along with some help from members in the genealogical community who are also connected to Guy reveals that we are descendants of Guy’s mother’s sister, Benedicta Voughton Weightman, her husband, William Weightman, and their children.

Guy’s will is specific regarding how his wealth is to be distributed to his extended family:

Item, I give and bequeath unto Thomas Voughton, Humphrey Voughton, and Martha Voughton, Children of my said Cousin John Voughton, one thousand pounds apiece interest or share in a Capital Stock erected in lieu of Debentures, made forth for the Debt due to the Army, by an Act of Parliament, passed the fourth year of the Reign of his Majesty King George, and attended with Annuities, after the rate of four Pounds per cent per annum.

Item, I give and bequeath unto John Cheatly, and Mary Cheatly, the Children of Mary Cheatly, deceased, who was Daughter of my Aunt Weetman, one Thousand Pounds a-piece, Interest, or Share in the said Stock, erected in lieu of Debentures, as aforesaid.

Item, I give and bequeath unto Benedicta Cheatly, another Daughter of my aforesaid Aunt Weetman, and now Wife of John Cheatly, near Tamworth in the aforesaid County of Stafford, Yeoman, during her Natural Life, one Annuity, or yearly Sum of Fifty Pounds Sterling, to be paid her by equal half-yearly Payments, to commence from my Decease.

Item, I give unto the Children of the said Benedicta Cheatly; viz. Lettice, Dorothy, Anne, John, William and Mary Cheatly, one thousand pounds a-piece Interest or Share in the said Stock erected in Lieu of Debentures, as aforesaid.
(Guy, 1724, pp4-5, 9-10)

Guy was generous to his extended family: his cousin Benedicta Cheatly received £50 per year, approximately $11,780 in 2020 currency, and each of her children received a single gift of  £1,000, approximately $235,596 today. Guy’s 52-page will detailed the distribution of his entire estate:

Having already spent £19,000 on the hospital, his will endowed it with £219,499, the largest individual charitable donation of the early eighteenth century. He also gave an annuity of £400 to Christ’s Hospital as well as numerous and diverse other charitable donations.The rest of his estate, some £75,589, went to cousins, friends, and more distant relatives.
(Solkin, 1996)

At the time of Guy’s death in December 1724, his great-niece, Dorothy Cheatley, was 33 years old. She had married Edward Simpkin eight years earlier (1717) and had three children, including a son who died in infancy. Dorothy and Edward would go on to have five more children, including her daughter, Benedicta, born in 1727. Benedicta later married John Silk when she was 22, in November 1749.

Benedicta and John Silk had ten children, including William who was born in 1763. William married Letitia Keay in 1787; while there is conflicting information about the number of children they had, two of their sons were given Guy as second names: Robert Guy (born 1802) and Thomas Guy (born 1807). Dorothy, Thomas Guy’s great-niece, was paternal great-grandmother to William and Letitia’s children.

It’s worth noting that up to this point, these families all lived in Tamworth, where great-uncle Thomas Guy had spent his childhood with his mother’s side of the family. William and Letitia broke this trend when, after marrying in Birmingham, they settled in Atherstone, about 8 miles south-east of Tamworth.

From this time (1802) to the present, each generation gives at least one male child “Guy” as a second given name.

It’s interesting to note that the census record for 1841 and 1851 shows the family residing at Guy’s Hospital, with Thomas Sr.’s occupation listed as “Keeper of Museum”. According to a fellow genealogist, the main function of a hospital museum keeper was to manage its anatomical museum, an essential resource for medical education at the time. It is reasonable to assume that Thomas Guy Sr. would be aware of his family connection to the founder of Guy’s Hospital. Based on genealogical sources, Thomas Guy Sr. and Eleanor lived at Guy’s until the end of their lives.

Thomas and Eleanor’s eldest son, Richard William (1834-1902) married Mary Ann Echlin in May 1860. They settled in Hackney, a London neighbourhood on the north side of the Thames. They had five children: Richard Guy Echlin, Kate Eleanor, Alice Maud, Edith Emily and Ernest Edward Guy, who left England for Canada in about 1888 and is Alvin’s grandfather.

In 2020, only 148 years have passed since Ernest was born; consequently there are not yet a great many public records available for genealogical research. The following is a list of partial information and records I’m working with: 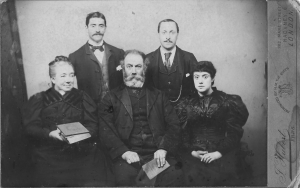 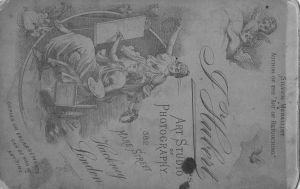